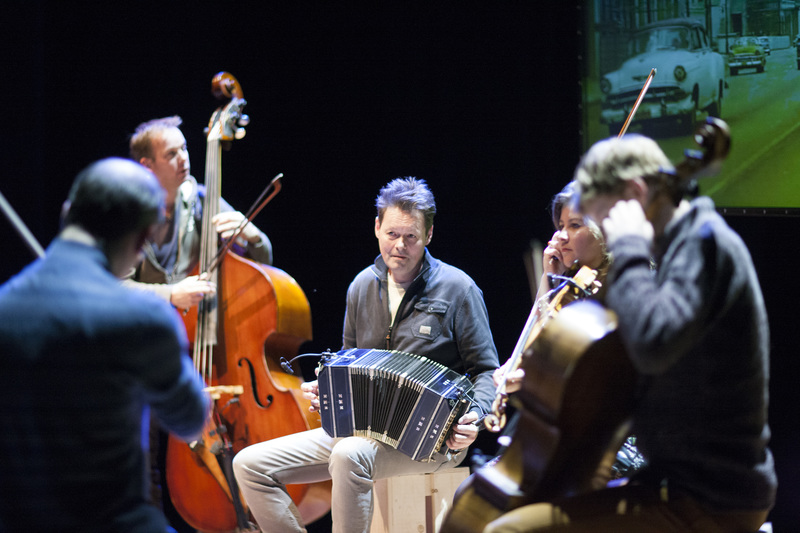 30! is thirty years of beautiful music and world stories. From 'Adiós Nonino' and Máxima's tear to Osvaldo Pugliese in Buenos Aires, from old tango melodies to new and existing compositions by Carel, including Clavel Rojo. In between Carel talks about his travels: from Broadway to Havana and from Moscow to Beijing. About his meetings with Ennio Morricone, the Dalai Lama and Sting. And, of course, about his beloved bandoneon. In Argentina, this instrument is so valuable that even street children make fake bandoneons out of wine boxes.

Carel Kraayenhof: "Piazzolla encouraged me to write my own music"
"For me, this really is an anniversary program, and we look back on it a lot." Yet Kraayenhof has more in store than just a series of 'golden oldies'. "I want this concert to continue the tradition of Astor Piazzolla. He has renewed the tango by adding elements of classical music and even jazz. I draw that circle even wider with influences from pop, world and film music."
(Read the interview with Carel Kraayenhof.)

Conversations of the tango

About the tango two important things are said: he comes up out of the mud and he tells life in three minutes. Carel can do that like no other. On the clay in the Beemster he composes his beautiful music, right out of the mud. Raw and penetrating sounds flow together in a beautiful world of melodic music

The press about the Carel Kraayenhof Ensemble

The Carel Kraayenhof Ensemble consists of:

Since Carel Kraayenhof was called by Astor Piazzolla herself to work together, a lot has happened. In the Netherlands Carel became known by 'the tear of Máxima'. But in Argentina and far beyond he was already famous for his tango. Together with his ensemble, including pianist Juan Pablo Dobal, Carel will show you many highlights from his musical travels around the world. From 'Gabriel's Oboe' by Morricone and 'Fields of Gold' by Sting to Carel's own music with Irish, Cuban, Chinese and Argentine influences. And of course 'Adios Nonino', that's not to be missed!