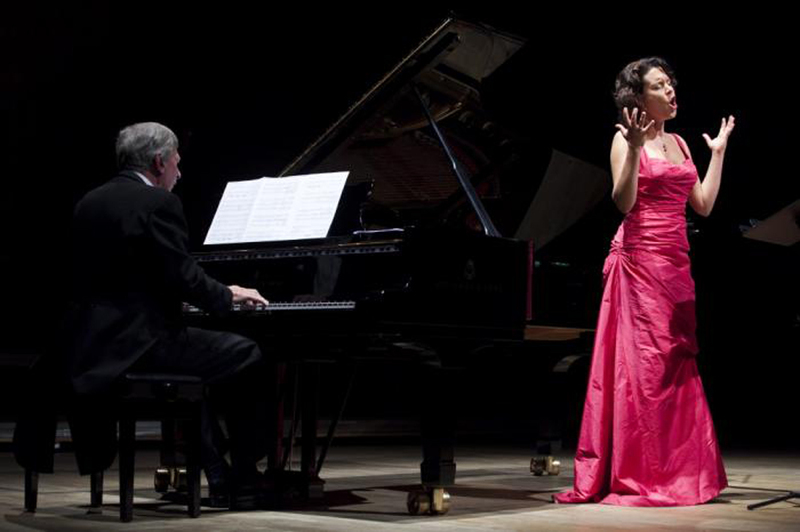 To our regret and that of Lenneke Ruiten and Thom Janssen, we have to inform you that this concert will be cancelled. Lenneke caught a cold last night so her voice is no longer in the condition required for this demanding program.

Lenneke Ruiten has climbed the opera mountain and is enjoying herself at the top. She sings the most beautiful roles at the biggest opera houses, among the most eminent maestros. The Dutch soprano has been a respected singer for over fifteen years, but in recent years her career has gained momentum. A performance at the Staatsoper Stuttgart opened many international doors for her. Meet in the Edesche Concert Hall this unmissable greatness in beautiful French, German and English songs.

For eighteen years Thom Janssen has been the faithful companion of Lenneke Ruiten. He studied piano with Jaap Spaanderman, Jan Wijn and Herman Uhlhorn. Thom Janssen then specialised in song accompaniment with Rudolf Jansen, among others, and took part in Robert Holl's international Schubert masterclass. His collaboration with Lenneke Ruiten earned him rave reviews: "piano playing by Janssen of great class" (Listen) and "Diamonds and Janssen create the right atmosphere" (Trouw).

Nightingales, larks and swans; the nineteenth-century song is teeming with animals and special places. For the Edesche Concert Hall, Lenneke Ruiten and her regular pianist and husband Thom Janssen put together a colourful programme of romantic songs. They take you to an uninhabited island, as sung in a song by Rachmaninov, and to the famous rock 'Die Lorelei' in the Rhine, about which Liszt composed a famous song. As a counterpart to all this natural beauty, Lenneke Ruiten also sings a selection from Britten's 'Cabaret Songs'. "Very theatrical and funny songs," says the soprano. "The song 'Johnny' is almost a mini opera. In terms of lyrics there are a lot of funny, clever and emotional things in these songs. They suit me very well!"

CONCERT CANCELLED (replacement concert in one of the next seasons) - Listen to the phenomenal voice of Lenneke Ruiten in romantic songs by Rachmaninov, Liszt and Debussy, among others. As an international opera star she performs in the important opera houses and at famous festivals, such as the Scala of Milan and during the Salzburg Festival. A greatness not to be missed! In the Edesche Concert Hall she expresses her love for the song. Experience the intimate experience of the sung song in the acoustics of the Edesche Concertzaal.