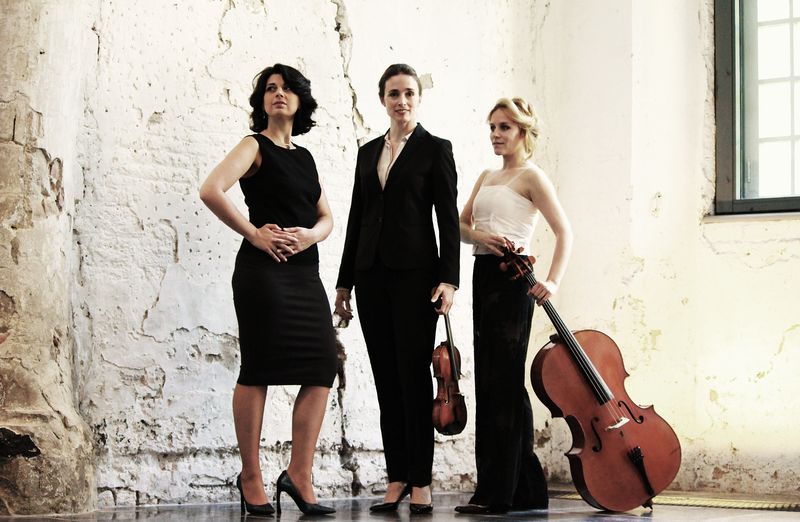 In 2009 Nino Gvetadze, Frederieke Saeijs and Maja Bogdanovic met each other for the first time. It clicked immediately and the three ladies decided to continue as a piano trio. But how do you distinguish yourself when all the great masterpieces are already played by other piano trios? Nino Gvetadze tells: "On our search for interesting repertoire we discovered that there is so much more good music, such as that of Clara Schumann, Fanny Mendelssohn and Lili Boulanger They are pieces that have remained under the dust for a long time, but now finally get the attention they deserve.

Fanny Mendelssohn even had Queen Victoria among her admirers during her lifetime. However, her song 'Italien' was published under the name of her brother Felix Mendelssohn. When Felix Mendelssohn was visiting Buckingham Palace and the Queen asked him about this song, he had to admit that it was not he, but his sister who was the composer. Besides this beautiful song Fanny wrote no less than 466 compositions. Her Piano Trio on. 11 is considered one of the finest in the nineteenth-century repertoire for piano trio.

Clara Schumann was one of the most famous pianists of her time. She made concert tours to Paris, Vienna, London and Berlin. Goethe, Chopin, Mendelssohn and Brahms admired her and at fourteen she wrote a piano concerto. For a long time her compositions were overshadowed by those of her equally famous husband Robert Schumann. The Arosa plays Clara Schumann's Piano Trio. 17, her masterpiece.

Just as Geraldine Mock was the first woman to fly around the world, French composer Lili Boulanger was the first woman to win the prestigious Prix de Rome. Unfortunately, Lili died at the age of 24, but what she achieved in her short life is comparable to that of Pergolesi, who also died young. The Arosa Trio performs a musical tribute to Lili Boulanger with two beautiful miniatures: 'D'un matin de printemps' and 'D'un soir triste'.

Georgian master pianist Nino Gvetadze has already won the hearts of many music lovers. She also made a huge impression on the jury of the International Franz Liszt Piano Competition in 2008. Not only did she go home with the second prize, but she also won the press prize and the audience prize! In the Edesche Concert Hall our artist in residence together with her music friends Frederieke Saeijs and Maja Bogdanovic will move you.

"Music is universal"
Whether there is such a thing as 'female' music,' Nino Gvetadze is not so convinced of that: "Of course you hear something about the character of the composer, but that goes just as well for their male colleagues. I don't think there's any difference. Music is universal and then it doesn't matter if you're a man or a woman."
(Read the interview with Nino Gvetadze.)

Frederieke Saeijs not only impresses with her flawless technique and tone brilliance, but also with her mastery of a broad palette of expressive means. The press gave her rave reviews. Frederieke Saeijs' game has the power to touch you and makes you long for more,' according to the International Record Review

Maja Bogdanovic undoubtedly belongs to the leading cellists of her generation. After a recital in Carnegie Hall The Strad Maja was praised for her exceptional sound beauty, masterful interpretation and technical perfection. Qualities she uses in the Edesche Concert Hall for the music of Fanny Mendelssohn, Clara Schumann and Lili Boulanger.

Also read this article in NRC about the most important female composers of the past 1000 years https://goo.gl/fnfwo1