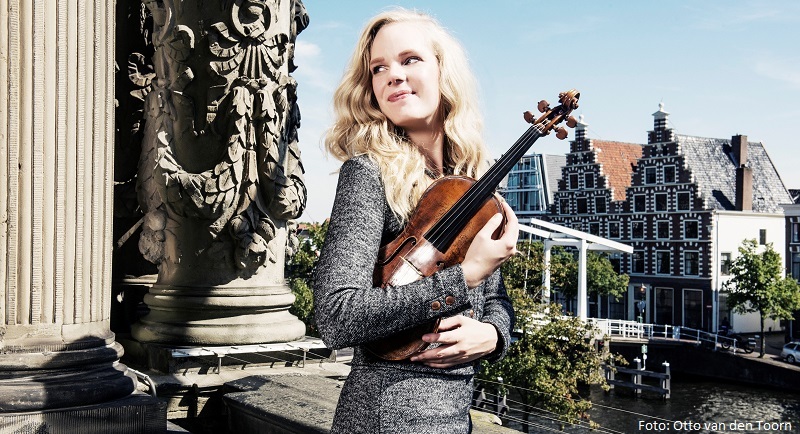 
"Music says so much more than words"
"For a year and a half I've been playing on the 'Mlynarski' Stradivarius, once played by the Polish violinist Emil Mlynarski. That violin has a beautiful round and deep sound, has a large range. And I'm constantly discovering new colors and possibilities."
(Read the interview with Simone Lamsma.)

How Schubert's Sonata became a 'Sonatine

Like so much of Schubert's music, his Violin Sonata in D, D 384 remained in the desk drawer for decades. It was not until 1836, eight years after the composer's death, that publisher Anton Diabelli saw bread in the publication of this piece together with two other violin sonatas from 1816. The fact that he marketed them as 'Sonatines' against Schubert's wishes had nothing to do with the quality of the music. The title 'sonatine' served purely marketing purposes: it turned out to be attractive pieces for developed music lovers in nineteenth-century Vienna. Simone Lamsma shows that Schubert's violin sonata is indeed serious chamber music

Prokofiev started his 'First Violin Sonata', on. 80 in 1938. At that time the Soviet Union was plagued by the cultural cleansing under Joseph Stalin and many of Prokofiev's friends and colleagues disappeared to the labour camps of the Gulag. The work on this violin sonata took Prokofiev a lot of effort. It was not until eight years later, in 1946, that he completed the work. Prokofiev recognized the gloomy character of the work and described passages in the first and last part as "the wind blowing over a cemetery".

Strauss is best known as a composer of film music-like orchestral works. Even in his chamber music you can hear that. Symphonic and for the musicians demanding is his Violin Sonata, in which hints of 'Ein Heldenleben' and 'Till Eulenspiegel' can already be heard. But apart from all virtuosity, the Violin Sonata is above all romantic chamber music. Richard Strauss composed the piece when he was in love with singer Pauline de Ahna, who later also became his wife. Would that explain the youthful energy of the faster parts? In the slow middle section Strauss lets the violin sing most of the time. It's reminiscent of Mendelssohn's famous 'Lieder ohne Worte'. Strauss himself was so enthusiastic about this part that he later had it published as a stand-alone piece entitled 'Improvisation'.

You will hear Simone Lamsma together with pianist Robert Kulek in beautiful violin sonatas by Schubert, Prokofiev and Richard Strauss. Simone plays one of the famous Stradivarius violins, the "Mlynarski" from 1718. According to Jaap van Zweden, Simone Lamsma is one of the leading violinists in the world. No wonder she is a sought-after soloist with major orchestras such as the Royal Concertgebouw Orchestra and the London Philharmonic