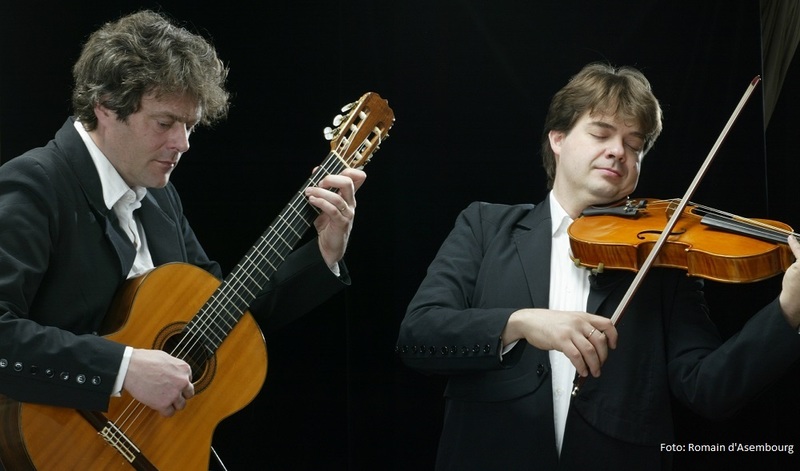 At the age of fourteen Enno Voorhorst already knew he wanted to become a guitarist. In 1987 he won first prize in Germany at the seventh guitar competition in Hof. This was followed by a number of other prizes, including the Dutch guitar prize in the Amsterdam Concertgebouw in 1992. In the same year Enno also won first prize at the Seto-Ohashicon competition in Japan.

Mikhail Zemtsov is viola player in the Utrecht String Quartet and since 2002 he has been viola leader of the Residentie Orkest. Since 2004 he has also been a member of the Artistic Committee of this orchestra. Since 2010 he has been teaching viola at the Utrecht Conservatoire. Mikhail Zemtsov plays a Daniel Royé violin on loan from the National Musical Instruments Fund.

Viola player Mikhail Zemtsov and guitarist Enno Voorhorst met six years ago and have given many concerts at home and abroad ever since. Duo Macondo's programme is dominated by Spanish and South American music but also includes contemporary work. The name Macondo refers to the book Hundred Years of Solitude by Nobel Prize winner García Márquez, in which he writes about the imaginary city of Macondo. Born in Colombia, Márquez knows how to weave the character of Latin America into his stories like no other.

The Spanish composer Antonio Ruíz-Pipó liked to place himself in the tradition of illustrious predecessors such as Isaac Albéniz and Manuel de Falla. As a child he grew up in Granada, surrounded by Spanish flamenco music. When his father died during the Spanish Civil War, then three-year-old Antonio moved to Barcelona with his family. There he later studied with Alicia de Larrocha and then in Paris with Alfred Cortot and Jean Français. His compositions are strongly anchored in the Spanish tradition, but also betray influences of Stravinsky and Bartók. Most famous was Ruíz-Pipó with his guitar compositions, such as Cancion y Danza which he wrote in 1958

The dances 'Andaluza', 'Oriental' and 'Zambra' come from Granados' famous 12 Danzas españolas. Barely 23 years old, Enrique Granados established his name as a composer and pianist with this masterpiece inspired by folk music. The musicologist Felipe Pedrell was the driving force behind this set of twelve piano pieces. Pedrell had done pioneering research into folk music on the Spanish peninsula in previous years
Andaluza' owes its name to several traditional Andalusian dances, such as the malagueña and the fandango. 'Oriental' is a slow dance in three-quarter time. Vibrators and 'strange' notes added to the key d minor give the piece an exotic touch. Finally, 'Zambra' harks back to Spanish gypsy music
The 12 Danzas españolas formed the leading path to Granados' most famous piano work Goyescas, inspired by paintings by Francisco Goya. Several melodies from this piano suite were in turn given a place in Granados' opera Goyescas, from which Enno Voorhorst and Mikhail Zemtsov play the 'Intermedio'

What we now know as 'Asturias' is undoubtedly one of the most famous pieces of Isaac Albéniz. Originally the piece was entitled 'Leyenda' (Legend) and formed the opening movement for the three-part piano cycle Chants d'Espagne. After the death of Albéniz in 1909, a German publisher published the piece as 'Asturias' and added it to the Suite españole. Contrary to what this new title suggests, Albéniz based this piece on the flamenco tradition and not on folk music from northern Spain. Mallorca' paints, in the words of guitarist John Williams, "a mysterious and breathtaking island with Moorish influences"

Louange à l'Éternité de Jésus' is the fifth movement from Olivier Messiaen's Quatuor pour la fin du temps which he composed during captivity in a Silesian camp during the winter of 1940-41. As an intern Messiaen had to do with what was available: a clarinet, violin, cello and piano. It became one of Messiaen's famous pieces. Louange à l'Éternité de Jésus' is often performed separately. Messiaen took the music for this piece from an earlier composition: 'Oraison' from Fête des belles eaux

Astor Piazzolla could justifiably be called the Argentine Bartók. He occupied himself exhaustively with the tango, the national folk dance of Argentina. Just as Bartók brought folk music in stylized form from the countryside to the concert stage, so Piazzolla took the tango from the dance halls to the concert hall. In his four-part suite Histoire du tango he sketches this development. The parts 'Bordel 1900', 'Café 1930' and 'Nightclub 1960' show the state of tango in those years. Piazzolla originally wrote the work for flute and guitar (the traditional tango instruments before the arrival of the bandoneon). During this concert the version for viola and guitar will be played.

Mikhail Zemtsov: "For me the sound of the viola is very moving."
"Guitar and viola mix in a special way", says Mikhail, "The register is the same, but the sound production is different. This gives you a special sound effect. It melts beautifully together." (Read the interview with Mikhail Zemtsov.)

Guitarist Enno Voorhorst and viola player Mikhail Zemtsov will give you a wonderful evening in Mediterranean atmospheres. Come along to the sweltering Spain of Albeniz and Granados. Also the Argentine tango is not lacking. By Astor Piazzolla three parts from 'L'Histoire du tango'! As a serene counterpart to all the rhythmic festivities, Enno and Mikhail play the tranquil 'Louange à l'Éternité de Jésus' by Olivier Messiaen