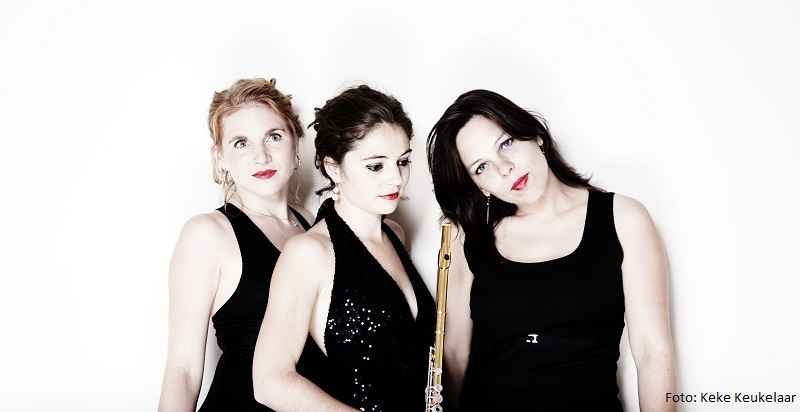 This concert has been cancelled

CANCELLED - Due to illness of mezzo-soprano Karin Strobos, the concert has been cancelled. Known from 15.4.2016, 13.55 hours. If you have already booked a ticket, we will contact you for a solution

'Love is a rebellious angel that no one can tame', sings Carmen in the famous opera of the same name by Georges Bizet. With this, mezzo-soprano Karin Strobos, flautist Felicia van den End and Daria van den Bercken immediately set the tone with this almost fairytale-like programme about love. Unrequited love and fervent desire run like a thread through the beautiful songs of Fauré, De Falla and Huë. Music that also alternates with passionate chamber music, such as Gabriel Fauré's Fantasy for flute and piano. Even more intense is the Elegy of Jules Massenet, where Karin Strobos joins the two instrumentalists. In short, let yourself be seduced by the most beautiful Mediterranean music from French, Spanish and Italian soil Pianist Daria van den Bercken, mezzo-soprano Karin Strobos and flautist Felicia van den End, they are now celebrated soloists. Also as a trio they are doing a lot of work and have won several prizes, such as the Debuut Publieksprijs 2008. With the special combination of voice, flute and piano, they cover a broad palette of classical music, ranging from opera to chamber music. Listen to three top level soloists in this unique collaboration

better to debut as an opera star than to fill in for the leading lady. It happened to Karin Strobos. She was immediately in the international spotlight. Since then it has become indispensable to attend major festivals and orchestras, including the Grachtenfestival and the Noord Nederlands Orkest. After a concert in January 2013 with this orchestra, she received 'the Golden Violin', an award for exceptional musical talent from the Northern Netherlands

flutist Felicia van den End belongs to the great talents of the Netherlands. In 2003 she won the Princess Christina Competition and the international flute competition 'Jeunesses Musicales' in Bucharest. Moreover, she received the Essent Music Award for young talent. She performs as a soloist with orchestras at home and abroad, and also plays a lot of chamber music

Flautist Felicia van den End tells frankly about her mission
"I've been involved with Latin America for a long time and I think it's great that I can really mean something here as a musician. Whether it's on the concert stage or in the humanitarian field, I like to inspire people with my music"
(Interview Felicia van den End, read this interview)

way in which pianist Daria Van den Bercken wants to reach people is challenging: sometimes suspended with grand piano and already on a crane, or driven through the city while playing the piano. Moving is what she does with her game, preferably at unexpected moments. With Karin Strobos and Felicia van den End has two strong supporters. Let yourself be surprised and carried away by these three strong musical personalities in music full of elegance and playfulness

This concert has been cancelled

CANCELLED - Due to illness of mezzo-soprano Karin Strobos, the concert has been cancelled. Known from 15.4.2016, 13.55 hours. If you have already booked a ticket, we will contact you for a solution

CANCELLED - Due to illness of mezzo-soprano Karin Strobos, the concert has been cancelled. Known from 15.4.2016, 13.55 hours. If you have already booked a ticket, we will contact you for a solution. - Alternative: Saturday evening 23.4.2016 Carel Kraayenhof and Juan Pablo Dobal