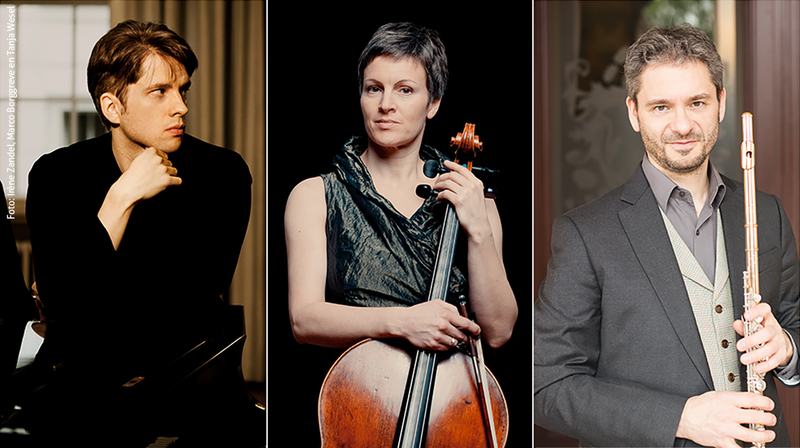 Joseph Haydn (1732-1809) Trio voor fluit, piano en cello in G, Hob. XV, nr. 15 Quirine Viersen (cello) Aldo Baerten (fluit) Severin von Eckardstein (piano)
Of the 45 piano trios Haydn wrote, only two are for the combination of flute, cello and piano. A lot of what makes Haydn's music unique can be heard in it. Haydn trio sounds cheerful, fresh, witty and surprising
Gabriel Pierné (1863-1937) Sonata da camera, op. 48 Quirine Viersen (cello) Aldo Baerten (fluit) Severin von Eckardstein (piano)
The title 'Sonata da camera' (a sonata to play in the living room) is mainly found in the Baroque period. And indeed, the particles titled 'Prelude' and 'Sarabande' point in the direction of the baroque. The music, on the other hand, is impressionistic and sounds light and airy.
Frédéric Chopin (1810-1849) Ballade nr. 2 in F, op. 38 Severin von Eckardstein (piano)
Chopin wrote a total of four ballads, of which Severin von Eckardstein plays the Second Ballade. In the Middle Ages ballads were narrative and imaginative songs sung by the minstrel. Of course Chopin's Second Ballade is not sung, but the piece sounds like an exciting story with a poetic beginning and a heavier middle section
PAUZE
Heitor Villa-Lobos (1887-1959) Assobio a Játo Quirine Vierssen (cello) Aldo Baerten (fluit)
Assobio a Játo (the title means as much as 'The fighter jet flute') for flute and cello is a good example of the exotic composition style of Villa-Lobos. His choice of flute and cello offers a maximum contrast between high and low, metal and wood, air and wire, breath and bow. A special effect sounds towards the end of the piece, when the flutist breathes through the flute without making a sound; indeed the sound of an overflying jet fighter jet.
Carl Maria von Weber (1786-1826) Trio voor fluit, piano en cello in g, op. 63 Quirine Viersen (cello) Aldo Baerten (fluit) Severin von Eckardstein (piano)
Carl Maria von Weber is best known for his operas such as Oberon and Die Freischütz. Weber's chamber music, on the other hand, is still a well-kept secret, like this atmospheric Trio. 63. Especially the slow third movement 'The shepherd's lamentation' appeals to the imagination. The music evokes the image of a lonely shepherd playing a lilting ballad on his flute
Order now!
Order now!

Severin von Eckardstein will provide a real first during his final concert as artist in residence! As special guests he brings along star cellist Quirine Viersen and the Belgian flautist Aldo Baerten. In the Edesche Concert Hall, the three of them are on stage for the first time. Together they let pieces from three centuries come together. Severin says: "We don't do that in a wanted way. For me, music is never rational. I see the connection between one piece and the other as a flowing line." Let Severin, Quirine and Aldo take you into the music of Haydn, Weber and Pierné.