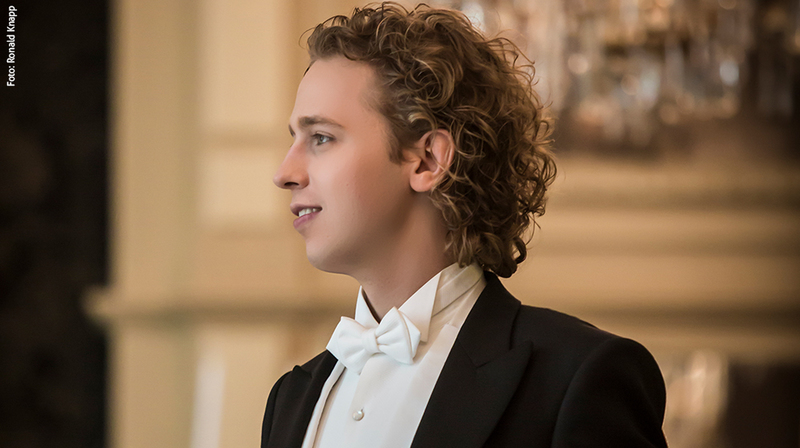 "Deep in a dream

A dream came true for 26-year-old Finnish composer Jean Sibelius when he was able to study in Vienna. Around 1900 Vienna was the place to be for artists and musicians. Nowhere was the number of artists per square kilometre so large. Painters such as Gustav Klimt and Egon Schiele and composers such as Gustav Mahler, Alban Berg (and therefore also Sibelius) sniff out the special atmosphere of the city and you can see and hear that in their work. With songs from their new album 'Deep in a Dream' baritone Raoul Steffani and pianist Gerold Huber take you to the sweltering Vienna of 1900.

You can't ignore it: Raoul Steffani belongs to the leading singers of his generation. In recent years he regularly won awards. In 2018 he won the GrachtenfestivalPrijs and the Dutch Classical Talent Audience Award. Earlier he won the Elisabeth Everts Prize and various prizes at the Princess Christina Competition. These awards enabled him to make his debut in important concert halls including The Concertgebouw of Amsterdam and the concert halls of Francisco, Paris, Munich and Vienna. Currently Raoul Steffani is being coached by Margreet Honig in Vienna

In the Edesche Concert Hall Raoul Steffani shares his passion for the song with pianist Gerold Huber, one of the most important song accompanists in the world. Huber received several awards. Twice he won an Echo Classik and, together with baritone Christian Gerhaher, the Prix International Pro Musicis Paris/New York. In 2001 Gerold Huber was prize winner at the Internationaler Klavierwettbewerb Johann Sebastian Bach (Saarbrücken). Together with Raoul Steffani, Gerold Huber will give you a wonderful evening in a Viennese atmosphere with a programme dedicated to songs by Grieg, Berg, Alma Mahler and Sibelius. Music that does extra justice to the Viennese Bösendorfer Imperial of the Edesche Concert Hall.

ListenRaoul Steffani as artist in residence during the Prinsengracht concert 2019. Watch the interview with Raoul Steffani at EenVandaag on August 1, 2019.

Listen up Raoul Steffani and Gerold Huber in Grieg's 'Zur Rosenzeit'. 48 no. 5 on Goethe's text.

Everybody dreams about the future. But it was poets and composers who incorporated these dreams into recognizable poems and songs. Moreover, there are singers such as baritone Raoul Steffani who can put these emotions into their voices. "A remarkable singer, with a natural sound with which he can convincingly convey an emotion as wonder", writes de Volkskrant. Together with star pianist Gerold Huber, Raoul speaks to the heart in the Edesche Concert Hall with songs by Grieg, Berg and Sibelius.