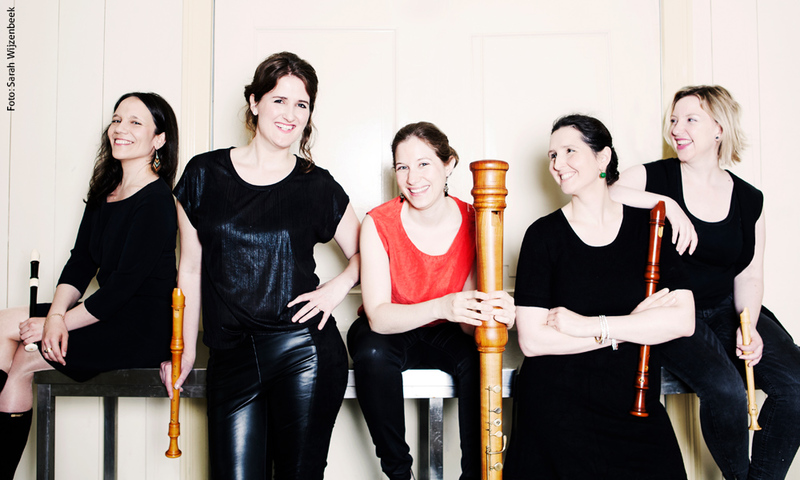 W. Byrd - If women could be fair

H. Purcell - Fantasia upon one note

Delight in Musicke (Lighting through music)

Journey with Seldom Sene to sixteenth century England. The most beautiful songs sounded at the court of King Henry VIII. Soprano Klaartje van Veldhoven, known for her moving and groundbreaking performances of early music, brings these songs to life together with Seldom Sene. The voice and the consort instruments merge so beautifully that magic is created on stage. The darkest lyrics are about unhappy love, death or musing on moral matters. But there is also room for light and playful madrigals about nature and joyful announcements of Christmas. In between songs Seldom Sene plays virtuoso dances and fantasies. Below that sounds one of Christopher Tye's In Nomine's from which Seldom Sene takes her name.

Sounds from the press about Delight in Musicke:

"The five ladies of Seldom Sene live up to their name: from their rich instrumentation they distill a seldom-heard beauty, which makes you forget that these are mere recorders" (Listen) "

"Variation is [...] sought and found in an alternation of vocal and instrumental, homophonic and polyphonic, gloomy and cheerful and all kinds of contrasting timbres. So this bouquet of dances and songs from the English sixteenth and seventeenth centuries has a special charm" (Classic Affairs)

Recorder quintet Seldom Sene has become an integral part of the Dutch early music stages. In 2014 Seldom Sene won first prize at the International Van Wassenaer Competition. Since then, Seldom Sene has been widely praised for "the excellent musical interpretation and wonderful choice of repertoire" (Frédéric De Roos) and the ensemble gives concerts all over Europe. One of the last highlights was a tour of eleven concerts during the Season of Early Music in 2016. CD projects such as El aire se serena and J.S. Bach: Goldberg Variations received praise from both the press and the public

Klaartje van Veldhoven's voice seems to be made for early music, so beautifully her sound fits the music from the Renaissance and the Baroque. Connoisseurs praise her clear voice. At a young age she could be heard on national and international concert stages. She toured Europe with the European Union Baroque Orchestra, sang as a soloist with the Residentie Orkest, the Nieuwe Philharmonie Utrecht and Barokopera Amsterdam under conductors such as Ton Koopman, Sigiswald Kuijken and Johannes Leertouwer. Klaartje has a special bond with the English song. In England she won the John Kerr Award for English Song during a competition in which only English singers participated. In the Edesche Concert Hall Klaartje van Veldhoven combines her unique voice with the warm recorder sounds of Seldom Sene.

Take a look at the court of the English King Henry VIII! Recorder quintet Seldom Sene and soprano Klaartje van Veldhoven bring the music played there to life. Enjoy songs that make you dream and cheerful dance music by composers like John Dowland, William Byrd and Henry Purcell. Music magazine Luister writes: "The five ladies of Seldom Sene live up to their names: from their rich instruments they distill a seldom-heard beauty