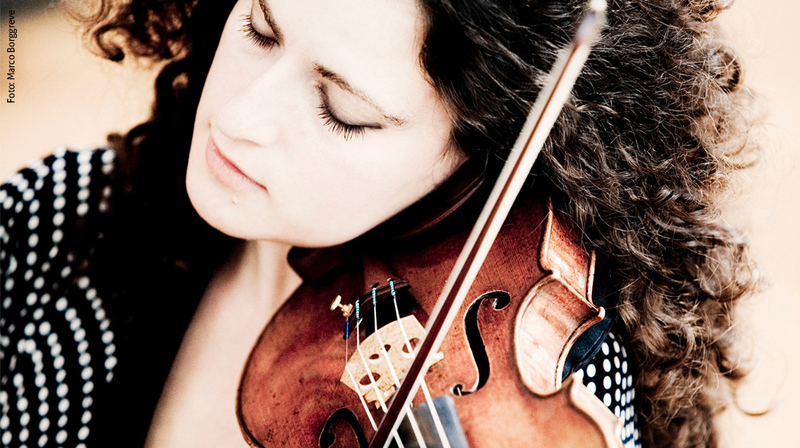 A selection from the program

Violinist Liza Ferschtman and pianist Roman Rabinovich are rapidly conquering the international concert stages. "A brilliant combination", British quality newspaper The Independent called this royal couple. "Ferschtman's grip on texture and colour is extraordinary, while Rabinovich's refined playing captures the most subtle mood changes in the music" It's a mustache in the violin works of Beethoven, Bartók and Shostakovich, which are steeped in temperament!

If there's one thing Beethoven and Bartók didn't take into account, it was the conventions of their time. Beethoven liked to ignore the expectations of his audience in that respect. Whereas the listeners of the time were used to entertaining tunes, Beethoven's 'Third Violin Sonata' is quite different. Quirky contrasts and contrary rhythms give this masterpiece its characteristic sheen. Robert Schumann must have realized this when he called this piece a heavenly "sunflower" in 1836.

Bartók does with his 'First Violin Sonata' if possible one more scoop on top. With Beethoven violin and piano are more or less equal partners, with Bartók the musicians each seem to go their own way. Like no other, Liza Ferschtman and Roman Rabinovich Bartók's exciting tissues of sound forge a satisfactory unity, as in the exhilarating dance final in which Hungarian and Romanian folk music compete for priority.

In Beethoven's time, a 'violin sonata' had a leading role for the piano, and the violin only occasionally played a solo passage, intended for experienced amateurs
Beethoven rigorously threw this principle overboard; in his Third Violin Sonata, piano and violin appear as equal partners. Beethoven made the violin sonata a serious matter.

Read the extensive floor plan of this program.

They are called a royal couple, violinist Liza Ferschtman and pianist Roman Rabinovich. No wonder, because Liza Ferschtman is one of today's most beloved violinists. About what makes her playing so special, de Volkskrant tells: "Ferschtman started playing, soft and conjuring, with a tone that forces you to go along with the violin line" Experience this for yourself in the Edesche Concert Hall, with Beethoven's 'Third Violin Sonata' and Bartók's 'First Violin Sonata', which is steeped in folk music