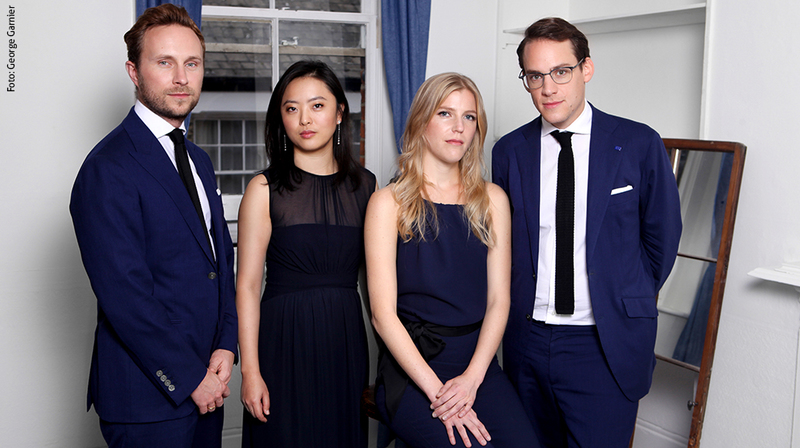 String quartets with a touch of nostalgia

For more than twenty years the Doric Quartet has played in the highest regions of the international chamber music scene. The ensemble received enthusiastic reactions from audiences and critics worldwide. "This is a beautiful ensemble, intelligent, technically brilliant, miraculously balanced," The Times wrote enthusiastically about the Doric Quartet. The Doric Quartet has won several important prizes, including First Prize at the Osaka International Chamber Music Competition 2008 in Japan and Second Prize at the Premio Paolo Borciani International String Quartet Competition in Italy. As the icing on the cake, the Doric Quartet made its debut at Carnegie Hall in 2017. In the Edesche Concert Hall the Doric Quartet dives into atmospheric string quartets by Beethoven, Mendelssohn and Britten. Music with a touch of nostalgia, with which the composers let themselves be heard from their most vulnerable side.

Nothing with Beethoven is what it seems. That certainly applies to his 'Sixth String Quartet'. In Beethoven's time, the audience will undoubtedly have raised their eyebrows when the last part began. After three more or less conventional parts, the mood in the last part suddenly changes. The quartet also owes its nickname 'La Malinconia' (The melancholy) to this closing movement. "This piece must be played with the greatest tenderness," Beethoven wrote above it explicitly. And indeed this music is one of Beethoven's most intense compositions.

Mendelssohn was a Beethoven fan from the very beginning. In his first string quartets he sometimes refers to his great example, in the 'Fourth String Quartet' Mendelssohn himself sounds particularly well. Anyone who has heard Mendelssohn's famous 'Violin Concerto' will recognize a lot in his 'Fourth String Quartet'. Apart from the fact that both pieces share the same key, they both start with a long melancholic melody. The slow movement is a beautiful 'Lied ohne Worte', as only Mendelssohn could write it.

Britten's 'Third String Quartet' was the composer's last instrumental piece. Just like Beethoven, Britten gave the last movement its own title: 'La Serenissima' (The most serene). In it Britten incorporated music from his own opera 'Death in Venice'. A meaningful act, because Britten completed his 'Third String Quartet' in Venice, a year before his death.

The Doric Quartet consists of:

What does the city of Venice have to do with Britten's 'Third String Quartet'? And why did Beethoven give the last part of his 'Sixth String Quartet' the title 'La Malinconia' (The wistful one)? The Doric Quartet will give the answer on Saturday 16 March. Mendelssohn's 'Fourth String Quartet' is also on the programme. Come and listen to this beautiful string quartet. The unique sound of this ensemble and their choice of special pieces keeps the string quartet young and fresh, according to the Washington Post