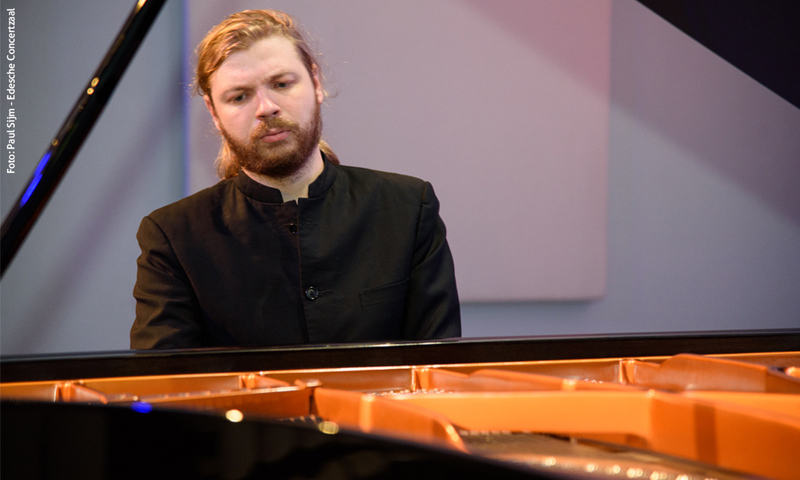 The career of master pianist Denis Kozhukhin is turbulent. In addition to First Prize at the Queen Elisabeth Competition (2010), he previously won the Vendome Prize at the Verbier Festival. Since then Denis Kozhukhin has played with important orchestras such as the Philharmonia Orchestra in London and the Philadelphia Orchestra and can be heard on famous concert stages such as the Wiener Konzerthaus, Carnegie Hall in New York and the London Wigmore Hall.

The two faces of Denis Kozhukhin

As a pianist Denis Kozhukhin likes to show different sides of himself. Just as easily he switches between all kinds of music styles. In the Edesche Concert Hall this varies from romantic piano pieces by Mendelssohn and Grieg to the blood-curdling 'Eighth Piano Sonata' by Prokofiev.

What the 'Lieder ohne Worte' are to Mendelssohn, these are the 'Lyrical Stücke' to Grieg. Both are atmospheric piano pieces in which a certain image or mood is the starting point. Imagine yourself in Mendelssohn's 'Venetian's Gondola Song' sailing through the canals of picturesque Venice. Grieg takes you in his 'Hochzeitstag auf Troldhaugen' to the Norwegian countryside.

The contrast between the atmospheric piano pieces by Mendelssohn and Grieg and the robust 'Eighth Piano Sonata' by Prokofiev could not be greater. They are called 'War Sonatas', the three late piano sonatas (numbers six to eight) that Prokofiev composed during the Second World War. The 'Eighth Piano Sonata', also the longest of the three, Prokofiev wrote with the liberation in sight. The almost triumphant end of the piece probably has something to do with that. If this piece is new to you as a listener, don't worry. Denis Kozkhukhin is an "impressive and reliable guide" in Prokofiev's masterpiece, according to the English quality newspaper The Guardian.

Master pianist Denis Kozhukhin, winner of the Queen Elisabeth Competition in 2010, always makes a big impression on the listeners. "As if a whirlwind went through the Great Hall... With an incredibly fine and nuanced touch he gave the sound colour and depth", wrote De Telegraaf enthusiastically about his debut in the series Masterpianists. In the Edesche Concert Hall this will certainly happen again with Mendelssohn's 'Lieder ohne Worte', Grieg's 'Lyrical Stücke' and Sergei Prokofiev's blistering 'Eighth Piano Sonata'